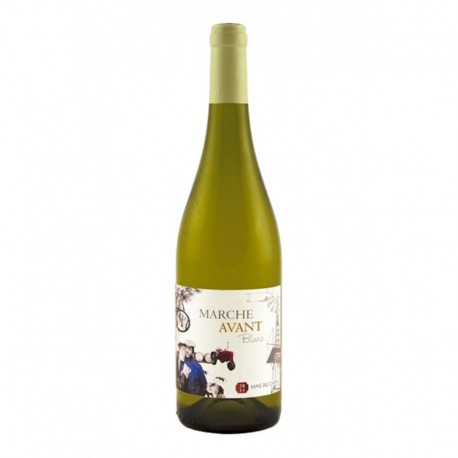 Frédéric COSTE bequeath to his daughter Valentine and her husband Arthur DELON 36 hectares in 1915. Over the generations, the family acquired thirty hectares more, Raoul Delon from 1935 to 1982, Philippe DELON in 1983 Nicole Soyris DELON 1984 1999 on the death of Nicole in 1999, his only daughter Emmanuelle decided to leave everything to settle in the house with his son and continue the family adventure, his spouse Luke VIGNAL after a few years as a wine merchant, decided to move from other side of the fence and will join it in 2008, from this union will be born along with their two daughters 11 vintages mostly varietal wines and organic.

The name "Vin de France" (VDF) was created in 2009 as part of the common organization of the wine market in Europe, replacing the words "table wine".

Second wine region in France after Bordeaux, the Rhone region is one of the oldest in the country. The vineyard is divided into two zones: the northern Rhone Valley and the southern Rhone valley. Other areas furthest part of the region: Vivarais Luberon, through the Diois. The Bordeaux region can produce red, white and rosé, of all kinds: dry, soft, natural and sparkling. However, the red wines are produced in this region (representing 80% of production). At the heart of the southern area is the Grenache grape that made the red wines "solar". However, the vagaries of climate forcing growers to use the assembly technique to balance their wines. Some additional varieties: Syrah, Cinsault, Mourvèdre and Carignan. For white wines, the grape varieties used are: bourboulenc, Grenache Blanc, Clairette, Roussanne, piquepoul, Maccabeo, Marsanne, Vermentino or Picardan. Rosé wines from the same grape varieties as the red wines. In the northern area, for red wines, the syrah grape variety predominates. For white wines, the grape varieties used are: Viognier, Marsanne and Roussanne. The designations are the Rhone region are numerous: Cote du Rhone, Cotes du Rhone-Villages, communal AOC (Condrieu, lirac, Côte-Rôtie, Chateauneuf du Pape, etc.) and AOC independent (luberon, ventoux, grignan les adhémar ...).